Every second year, St. Wolfgang in Austria becomes the international hotspot for “Who-is-Who” in echocardiography from all around the world. This year the 4 day event took place early October. TOMTEC played again - like in all the previous conferences in St. Wolfgang an active role there.

More than 350 participants from 36 countries around the globe participated in this very clinical oriented symposium. The distinguished international faculty of 35 well known speakers presented more than 150 echo case studies. The topics of the lectures ranged from echocardiography basics such as common Doppler and 2D pitfalls to future technologies like 3D printing, Augmented Reality or Artificial Intelligence.

The latter was presented by Bernhard Mumm, one of the TOMTEC founders and technological visionary. He drew a lively picture of how cardiac diagnostic can be improved by technological innovations, for example how artificial intelligence will help physicians in the future in their daily clinical practice.

Additionally, TOMTEC organized hands-on-workshops on how to quantify the heart chambers according to the guidelines and gave the participants the opportunity to visit a “Virtual Reality Learning Lab”, where they could get familiar with the use of VR in cardiac imaging.

Overall the conference and workshops have been extremely well received by the participants. 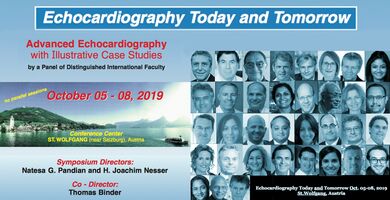