From December 5-8, 2018, Milan was the hub of echocardiography as the ESC held its yearly EuroEcho Imaging event in the capital of the Italian Lombardy region. For TOMTEC, EuroEcho was once again a major opportunity to prove its leading role in today´s cardiological diagnostic software solutions as well as its reputation as an innovation-driven and future-focused software company.

At the TOMTEC booth, the whole range of software solutions was presented – from automated strain measurements to 3D/4D analysis of the left and right ventricle. Especially the high level of automation that enables users to perform accurate and reproducible results for complex clinical measurements within a very short time convinced the visitors. With its software packages, TOMTEC addresses urgent needs in daily routine such as quick, reliable and efficient results in combination with vendor-neutrality.

As talk is cheap, TOMTEC offered tutorials each day so EuroEcho visitors could get a literally first hand impression of the software´s benefits. The workshops provided practical guidance on the application of the advanced techniques to echocardiography images.
Featured areas included assessing mitral valve pathology before and after surgery, the aortic valve for TAVR procedures and the right ventricle in normal and diseased states. Furthermore, the use of 2D strain and its application in different situations, including amyloidosis and  athletic hearts, was addressed. Finally, there was a focus on pediatric echocardiography and the significant role of structured reporting.

Virtual reality* as an eye-catcher
One of the most popular features of this EuroEcho were the VR glasses that could be tested at the booth or during a workshop. Visitors virtually traveled from the booth directly into the branches of cardiac vessels or heart chambers. This journey, however, is much more than a pleasure cruise. Its relevance for future cardiac care became clear when in a workshop Rolf Baumann (CTO TOMTEC), showed examples of future procedures and processes in cardiology.

*not CE Marked. Not for Patient Use 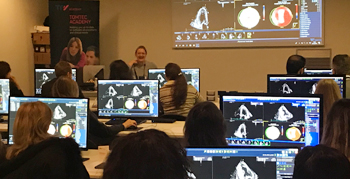 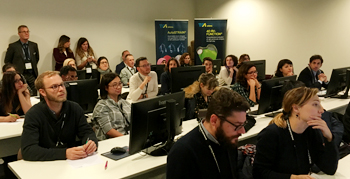 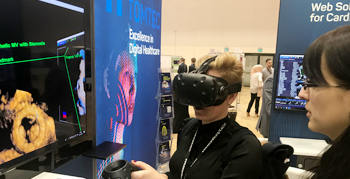 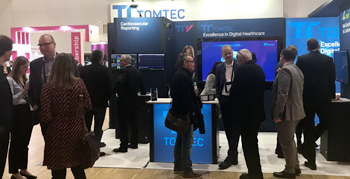