Virtual Reality: Making the best out of 3D data

From September 13-15 2019 Padua in Italy hosted cardiac echo experts from across Europe. The 2019 European Edition of „3D Echo 360°“ revealed the added value of implementing the third dimension into echo routine. Of course, TOMTEC did not miss this opportunity to show how beneficial its solutions are in diagnostic routine – today and in the near future.

Beside two Hands-On-Workshops on „Heart chamber quantification according to the guidelines“ it was the TOMTEC TALK which attracted the attention of the congress visitors. Bernhard Mumm and Niklas Hitschrich from TOMTEC presented the “Virtual Reality Learning Lab” and gave a forecast of how VR technology could be used in cardiac imaging.

So far, 3D echo images have the limitation of being assessed on a flat monitor. So the real benefit of the third dimension could not be fully applied. Using VR technology this obstacle can be overcome and cardiologists are able to really move within space and at the same time perform measurements they are used to from their normal assessment.

One idea of using VR in cardiac diagnostics in the future for example is to have a closer look at suspicious areas the cardiologist is unsure about. If this is the case she or he could switch from the normal view to VR and see the heart and its structures quite huge, detailled and in true volume. Moreover with VR it might be possible to mimic complex procedures for example by trying several prosthetic valves before the intervention is performed.

That VR is not only a toy but will have a true value in daily routine was proven by the great interest the cardiologists have shown during the talk and at the TOMTEC booth: The VR glasses were handed from one to another and the reaction was all the same: Wow!

The next opportunity to try TOMTECs VR technology* will be the EuroEcho in December in Vienna. 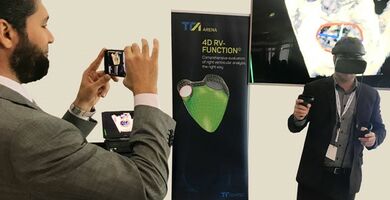